CRAIG EARLE, MD, MSc, FRCPC
How Can We Introduce Innovative Treatments into our Publicly-Funded Healthcare System? 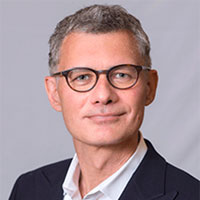 Dr. Craig Earle is a medical oncologist at Sunnybrook Health Sciences Centre Odette Cancer Centre in Toronto, Ontario. He is Vice-President of Cancer Control at the Canadian Partnership Against Cancer, a Senior Scientist at the Institute for Clinical Evaluative Sciences, and a Professor of Medicine at the University of Toronto. He is past Chair of the Ontario Steering Committee for Cancer Drug Programs and is a current member of the pan-Canadian Oncology Drug Review Expert Review Committee. His personal research focuses on evaluating and improving the quality of care received by patients with advanced cancer and cancer survivors, the effects of financial incentives on care delivery, and making linked, de-identified administrative data more available for health research.
Dr. Earle originally trained and practiced in Ottawa, after which, beginning in 1998, he spent 10 years in Boston at Harvard Medical School and the Harvard School of Public Health. Between 2008-2017, he was Director of Health Services Research and Head of Clinical Translation at the Ontario Institute for Cancer Research.
In 1976, the Ontario Cancer Treatment and Research Foundation established a lectureship in honour of Dr. W. Gerald Cosbie

Dr. Cosbie was born in Toronto on January 29, 1894. He was educated at Upper Canada College as card card-body bg-light well as the University of Toronto Medical School. After graduating in 1915, he joined the Royal Canadian Army Medical Corps. He served with the Third Canadian Division and was wounded at Vimy Ridge. His distinguished service saw him awarded the Military Cross for outstanding bravery.

Upon his return to Canada in 1919, he undertook graduate studies and became a Fellow of the Royal College of Surgeons of Canada, as card card-body bg-light well as a Fellow of the Royal College of Obstetricians and Gynaecologists. He pioneered and refined certain treatments for gynaecological cancer. On September 13, 1921, he cared for the first patients who were treated with radiotherapy at the Toronto General Hospital (TGH).

Dr. Cosbie was a gynaecological consultant at the Ontario Institute of Radiotherapy at the TGH when his colleague, Dr. Gordon Richards, died in 1949. Despite the demands of a busy practice and lecturing and clinical commitments at the University of Toronto and at the TGH, Dr. Cosbie stepped in to fill the void left by Dr. Richards. Dr. Cosbie succeeded him as a member of the Ontario Cancer Treatment and Research Foundation, as Chairman of the Advisory Medical Board and its Executive Committee. He also played an important role in discussions with the provincial government, ultimately leading to the establishment of the Ontario Cancer Institute.

He retired from the staff of the university in 1954 and accepted the post of Medical Director of the Foundation, on a part-time basis. Dr. Cosbie had unofficially been performing these duties since 1949. The position became full-time once he retired from his private practice.

On June 30, 1965, Dr. Cosbie stepped down from his post as Medical Director. Under his vigorous and able leadership, many new programs had been introduced and existing programs improved and expanded. He was an entertaining raconteur, a fluent speaker, and a skilled writer, making him an excellent representative of the Foundation and a strong proponent of its work. In 1973, after moving to Vancouver, Dr. Cosbie resigned from the Board after serving the Foundation and the Advisory Medical Board committees for many years.

The first Cosbie Lecture, which was awarded to the newly-formed Canadian Oncology Society, was delivered on January 27, 1977 in Toronto, by Mr. Basil Morson, the distinguished pathologist of St. Mark’s Hospital in London, England. Dr. Cosbie was on hand for the occasion.